It was apparent to me that something needs to remedy this and fill in the gap in services. 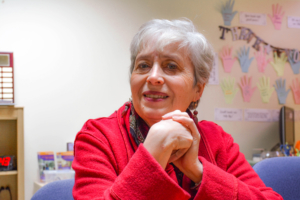 Hear Entendre Québec was founded in 1979. It all started when Alvin Goldman and several other clients from the Audiology department of the Queen Elizabeth Hospital  received a letter from their audiologist, Dale Bonnycastle, inviting them to discuss the possibility of forming a self-help group for hard-of-hearing persons. Dale Bonnycastle (image on right) an audiologist at the Queen Elizabeth Hospital, felt that the services offered to hearing impaired people were lacking, that administering hearing tests alone was clearly not enough, and the psychosocial aspects of hearing loss were not properly addressed.

With assistance and input from Joan Westland, the executive director of the Association of Hearing Impaired Adults, and Marilyn French St. George, audiologist and teacher at the McGill University School of Human Communication Disorders, a plan was put together to form a group for adults with acquired hearing loss that would focus on self help, sharing difficulties and finding constructive solutions.

It was with these issues in mind that 14 people gathered for a first meeting in mid-October 1979, ready to devote their time and energy to the English-speaking hard-of-hearing community. Dale Bonnycastle, Alvin Goldman, Ed Plover and Lily Bernstein were the first active members who formed Hear Entendre Québec’s team. They quickly devised numerous ideas and plans, including programs and workshops, as well as the much-appreciated biannual magazine, The Communicaider.

The first program, named “Aural Rehabilitation,”  later developed into the HEAR program. It included workshops on topics such as the anatomy of the ear, communication strategies, phonetics and acoustics (later known as the very popular Speechreading workshop), emotional issues related to hearing loss, hearing aids and devices (later known as the ALD program), and coping with stress. These topics and concerns still remain vital to Hear Entendre Québec today.

This site uses cookies. By continuing to browse the site, you are agreeing to our use of cookies.

We may request cookies to be set on your device. We use cookies to let us know when you visit our websites, how you interact with us, to enrich your user experience, and to customize your relationship with our website.

Click on the different category headings to find out more. You can also change some of your preferences. Note that blocking some types of cookies may impact your experience on our websites and the services we are able to offer.

These cookies are strictly necessary to provide you with services available through our website and to use some of its features.

Because these cookies are strictly necessary to deliver the website, refuseing them will have impact how our site functions. You always can block or delete cookies by changing your browser settings and force blocking all cookies on this website. But this will always prompt you to accept/refuse cookies when revisiting our site.

We fully respect if you want to refuse cookies but to avoid asking you again and again kindly allow us to store a cookie for that. You are free to opt out any time or opt in for other cookies to get a better experience. If you refuse cookies we will remove all set cookies in our domain.

We provide you with a list of stored cookies on your computer in our domain so you can check what we stored. Due to security reasons we are not able to show or modify cookies from other domains. You can check these in your browser security settings.

We also use different external services like Google Webfonts, Google Maps, and external Video providers. Since these providers may collect personal data like your IP address we allow you to block them here. Please be aware that this might heavily reduce the functionality and appearance of our site. Changes will take effect once you reload the page.